'Short Kut' was not a bad film to begin with. It was probably a terrific idea for a comedy of misguided zeal - a hammy actor, Arshad Warsi, stealing a struggling scriptwriter Akshaye Khanna's great plot and becoming a superstar. 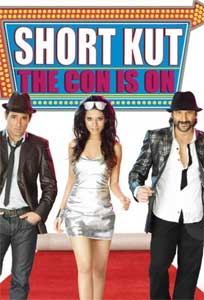 Featured Video
But in the absence of motivated mirth, the comedy just plunges out of control and is navigated entirely by the comic capabilities of Arshad Warsi.


Arshad plays that nightmare of every entertainment industry... He can effortlessly go over the top while hamming.


'Short Kut' was probably an idea that got lost in translation. There are signs of sparkle that fizzle out as the film progresses. Where we expect a torrent of laughter we get a drizzle of mild humour.


Some interludes are no doubt funny...like when during shooting 'superstar' Arshad keeps messing up his line, a cute assistant director finally rolls down by his feet and mumbles the lines in understudied sarcasm.


Where are more such moments in this melee of misapprehended mirth? Where are the satirical jibes at the workings of the Indian film industry that would have elevated the comedy into more than what it finally is? A truncated travesty with very little to recommend except some tongue-in-cheek digs at the cult of megalomaniacal stardom.


The film seems to have been made at a cut-price budget. Posh hotel rooms are suggested with labels pinned on hastily to doors that probably belong to a lodge. The Thai outdoors come on towards the end in a breathless and quite absurd climax on top of a bridge where a starlet falls to her death.


'Short Kut' works neither as burlesque nor high-action.


Ennui is often a poor replacement in the plot for episodic splendour. Arshad Warsi's tongue-in-cheek performance as the cheesy superstar holds the plot together. But not long enough for us to forget that 'Short Kut' is trying to be funny when the characters are far from comfortable in the zany zone that they never quite own.


And what pray are Sanjay Dutt and Anil Kapoor doing in one of the tackiest item songs one has seen in recent times?


The makers of 'Short Kut' don't even know how to spell 'cut' let alone cut the film into a shape that can be considered entertaining, let alone enticing.