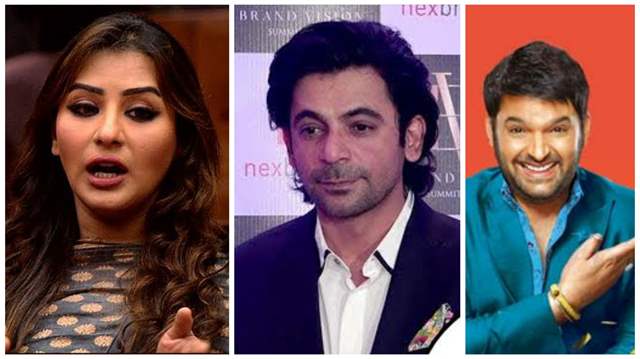 The first episode of the much-awaited sketch comedy show Gangs of Filmistan aired earlier in the evening.

However, for the past couple of days, as known, there has been a barrage of controversies surrounding the show and Shilpa Shinde. Shinde, who was one of the main faces of the show recently went on-record to not just slam the makers of the show but also mention how she was 'tricked' into doing the show even though she made it clear earlier that she won't be working with Sunil Grover.

Nevertheless, ever since then, creator Preeti Simoes has denied all her accusations and now after the airing of first episode, Shinde has quit the show.

In an at length interview with ETimes TV, she opened up on the same. First clarifying about the hardwork she put in and how she has no problems with her co-stars, she said, "I had given my 200 percent, I had done a lot of hard work which obviously was not seen at all. But as I said earlier, I had no problems with the team, the star cast. They all have worked hard and they are the best actors to work with. So, I gave my best wishes to them through my social media post. I am not trying to be diplomatic here, I love all the actors whom I worked with on the show. But there is also the truth that I am very hurt after I saw the first episode and there is a bitter feeling now."

Just like earlier, she once again went on to slam the makers saying they should rename the show to The Sunil Grover Show and even challenged them to air it in the same timeslot at The Kapil Sharma Show. She said, "Comedy is a male dominating genre I have said this earlier. I felt like I was being used as an eye candy. I came, I uttered two lines and went off. I was not interested in doing Television. It's not like I have no money and was desperate to get back to work. But they have used my name. I am doing the show after two years, I should have at least given a special entry. Till the time we were performing the scenes without Sunil ji we all were doing great, the moment he started doing gags, we got sidelined. I am working after a gap of two years, why will I try to spoil everything, but I want to say that I was getting exploited on the sets when it comes to acting. This show is being made to give Kapil Sharma a competition. I am giving an open challenge to the makers if you want to make the show all about Sunil Grover, then please rename it to The Sunil Grover Show and air it on the weekend when Kapil's show airs, I am ready to work."

She concluded saying, "When things have got so ugly what will I do even if I return to the show. It is a comedy show, how will I perform after having this bitter feeling? After having an experience of so many years I am being used as a prop, is it justified? If I am a bad actor then tell me on my face. I want to ask my fans what they feel after all this should I return to the show? I am asking them, I am asking the channel, after giving this treatment to me and using my name for the promotion of the show, are you willing to call me back? I feel the makers have already got what they needed from me. I am not doing the show, I don't want to be a part of a show where I am not seen, where I don't have my self-respect, I don't want to do it."

AshVal6 1 months ago typical shilpa everone is wrong except her, before i supported her but now totally gone off her, hope she retires

ans1122 1 months ago Oh God.. Her Tantrums stays the same, she is always a liability to any show she participates in. always leaves it in the middle with this whole ALL ABOUT ME attitude..