After juggling careers as an actor, TV host, laughter show judge, singer and aspiring politician, Shekhar Suman is set to don the director's hat. He says he will direct a romantic film with son Adhyayan in the lead. 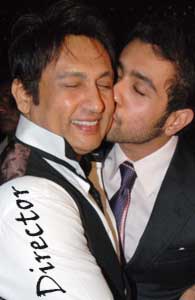 Featured Video
'It'll be a romantic film as I'm a great romantic at heart...it'll be on the lines of epic romantics like DDLJ ('Dilwale Dulhania Le Jayenge') or 'Kuch Kuch Hota Hai' or a Hollywood romance drama,' Shekhar told IANS on telephone from Mumbai.


Talking about the cast of the film, he said: 'The first priority for a director is to finalise his technical crew and then the cast. However, Adhyayan is 200 percent in my film and I've also short-listed a few girls but haven't finalised anybody yet.'


The actor, who shot to fame with television serial 'Wah Janab' in the 1980s and later cemented his position with Jaya Bachchan's hit sitcom 'Dekh Bhai Dekh', says he always wanted to be a director.


'I must have done a lot of TV but my heart has always been in movies and I'd like to direct a film. I'm on the lookout for a fantastic script and I'm also watching a lot of Hollywood classics to know why successful films became successful and what do people like and dislike when it comes to movies,' he said.


'I'm also watching movies as a technician and as a director who would conceive a film and add a new thing to direction. Direction is the most creative art form, as everything in a film is a director's vision. He knows everything before he wields the megaphone,' added the actor who also shared screen space with Rekha in the movie 'Utsav'.


Shekhar also plans to rope in his actor son Adhyayan to assist him when he wields the megaphone for a movie.


'I don't' know the technicalities of a director, as I haven't pursued any course for that unlike Adhyayan who has learnt acing and direction in New York. So may be he'll help or assist me and we could take it forward,' said Shekhar who shot to fame with Jaya Bachchan's hit sitcom 'Dekh Bhai Dekh' in the early 1990s.


The director-in-making has a lot on his plate to keep him from rolling the camera until at least the next six months.


'With all the things around me now like my shows, movies, plays, production house, singing, going to the gym and dancing it gets a little difficult but hopefully I'll be ready by the end of this year,' he said.


Shekhar was talking to IANS to promote his upcoming show 'Tedhi Baat Shekhar ke Saath' that goes on air July 6 on Sab TV.


Produced by his company Windmills Entertainment, 'it is a tongue-in-cheek fake interview show' starring Gurpal Singh as an interviewer and Shekhar as the interviewee.


The catch is that in each show, Shekhar plays a new character inspired by real-life celebrities from different fields of work.

Shekhar's other future projects also include movies like 'Dekh Bhai Dekh', 'Chaloo Movie', an English musical and a music album.


The actor, who is also in talks to revive his hit talk show 'Movers & Shakers', is content with his career.


'I'm happy with all the things that are happening around me and probably there is a lot coming my way. It's a great phase I'm going through,' he said.