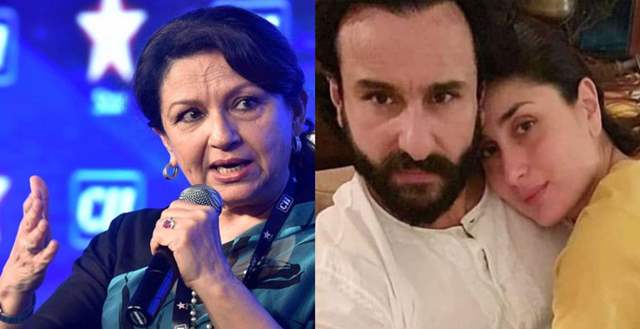 Saif Ali Khan and Kareena Kapoor Khan are expecting their second baby and currently Bebo is in her last trimester.

Recently, Saif had quashed rumors revolving around about the arrival of their little bundle of joy and confirmed that they will be welcoming their little one in the first half of February 2021.

On one hand where Saif and Kareena have a good news coming in, on the other hand there is one major stressful event that has disrupted their happiness. Saif's recent controversy revolving his show Tandav!

Reportedly, Tandav's situation regarding the legal issues faced by the team is escalating with every passing day and this is seriously stressing out Saif Ali Khan’s family especially his mom.

According to reports in Spotboye, the 76-year old legendary actress and the senior begum of the Pataudi clan, Sharmila Tagore is worried about how the legal processes against Tandav team will turn out, now with the honourable court denying anticipatory bail to all the concerned party, she is stressed in which direction will the case go.

As per a source close to the Pataudi family, Sharmilaji’s health has suffered since the Tandav controversies broke out. The very close to the family has been quoted by the entertainment portal saying,

Saif and Kareena are expecting a baby in February. The last thing they need at this time is such a terrible crisis. Sharmilaji is deeply concerned at the way the whole episode has panned out. She has often told Saif to be discreet with his public statements and cautious about the projects he takes on.

Apparently, after the Tandav experience, Saif has decided to run all the scripts offered to him through his vastly experienced mother (who knows her Satyajit Ray as well as her Manmohan Desai) before saying yes or no.

In a recent interview with me, Sharmilaji while speaking on Saif’s choice of roles had said,

He isn’t afraid to take risks as an actor. He has always been unconventional in selecting parts. That could get tricky at times.