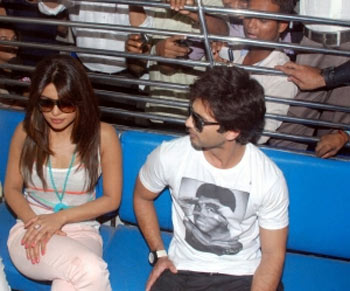 Actors Shahid Kapoor and Priyanka Chopra recently travelled by a "local" train, and both said they boarded a suburban train after a long time and it was a fun ride.

"I got on to a train after a long time. It was a bit chaotic because there was a lot of media and public. It was tough to reach our destination because of the crowd but getting onto a train and going from one station to another was fun," said Shahid at the launch of an eyewear Wednesday.

Said Priyanka: "Initially, when I came to Mumbai I used to travel in local trains a lot. So, it felt nice that trains haven't changed, the public has not changed. So it was a good experience."

Both the actors and director Kunal Kohli were promoting their film "Teri Meri Kahaani". They first boarded a local train to reach Jai Hind College, Churchgate, and from there they went to Oberoi Mall to launch Opium eyewear in a car.

Kohli flaunted his funny side by saying, "We hope 'Teri Meri Kahaani' is a superhit. We have just shown three births and it is a time of sequels. So if the movie is a hit, I'll show four more births in the next film."