View Profile
Shahid Kapoor, popularly known as B-towns chocolate boy, hasn't been seen on the big screen for quite some time now. His la 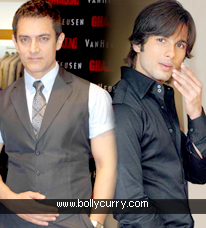 test release being Milenge Milenge (July '10) opposite ex-flame, Kareena Kapoor, Shahid has now dedicated all his time in working on his upcoming film, Mausam. The project is also marked as his father's, Pankaj Kapoor, directional debut.
Just shooting for one movie at a time, whose footstep is Shahid apparently following? The Mr. Perfectionists, Aamir Khan maybe? Yes, many are now comparing Shahid with Aamir in the way he has chosen to only work on one film at a time.
What is Shahid's take on this?
Shahid confirms that he has been shooting for one film right now, but he assures that he isn't going to work this way at all times. He clears that this is one movie his father has held very dear to his heart therefore wanting to give all his time and attention towards it. After the completion of the movie, he would love to do at least three films at a time, if opportunity permits.
BollyCurry wishes the Mausam team all the success for all its hard work!