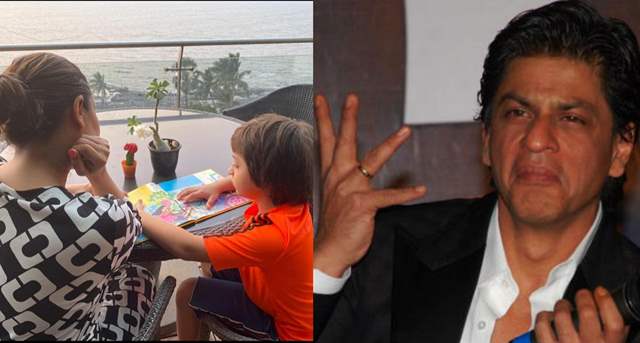 Shah Rukh Khan is one of the wittiest actors in B-town and the superstar never leaves a chance to use his wittiness to entertain everyone and this time around, he did something similar.

SRK and his wife Gauri Khan are parents to three amazing children, daughter Suhana Khan and sons Aryan Khan and AbRam Khan and the duo never leave any opportunity to share adorable photos of their three musketeers on their social media handles.

On Wednesday, Gauri took to her social media handle and posted a picture of son AbRam Khan wherein the little munchkin can be seen gazing at the camera wearing boxing gloves.

Later, when daddy Shah Rukh Khan saw the post, he instantly reacted to his wife, Gauri’s post which had AbRam sitting on the floor wearing his boxing gloves. He looks adorable as he innocently looks at the phone camera.

On Twitter and Instagram, Gauri Khan shared a picture of AbRam Khan with red heart emoji and called him “My Mike Tyson”.

In this picture, the young Khan is sporting a casual avatar. He is wearing a grey shirt and blue-grey stripes shorts.

Reacting to the post, Shah Rukh Khan dropped a savage comment. The actor retweeted the tweet made by Gauri and tweeted, “Arre yaar!!! Where was I ???”

SRK joked and asked where was he when AbRam was getting all clicked.  Maybe, because the little one is upset that dad SRK is not home.