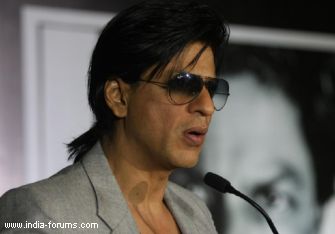 Brushing aside rumours of a tiff between him and actress Juhi Chawla, superstar Shah Rukh Khan says it is the media that creates such pieces and then embarrasses a celebrity with questions about them.

"There is so much tabloidism in the work we do and the unfortunate bit is that some people write it and start believing in it. Then to come back and ask us about something that does not exist is a little odd and embarrassing for us because it did not exist in the first place," the 46-year-old said at an event here.

"It's like the smallest particle of atom they are still trying to figure out. So, when you ask this to me and Juhi, all of us get a little awkward about why you are asking this, this has never been a problem," he added.

Recalling his initial days in the industry, Shah Rukh said that Juhi's family always made him feel at home.

"When I was new in the film industry, Juhi, her mother, her brother and her whole family looked after me and they have been very kind to me. We are very close friends," said the superstar.

"I have told her never to leave my side, even if I misbehave publicly and she has said that even if I misbehave and I am ill-mannered, she will still be friends," said Shah Rukh who has done films like "Raju Ban Gaya Gentleman", "Phir Bhi Dil Hai Hindustani", "Yes Boss" and "Duplicate" with Juhi.

Shah Rukh is currently busy shooting for Yash Raj's untitled next opposite Katrina Kaif. He is also co-producing "Student of Ther Year" with Karan Johar.