There has been speculation in the media regarding the early exit of some YRF shows on Sony. It was reported that the supernatural saga Seven, might shut down before its 26 episode formal run ends. 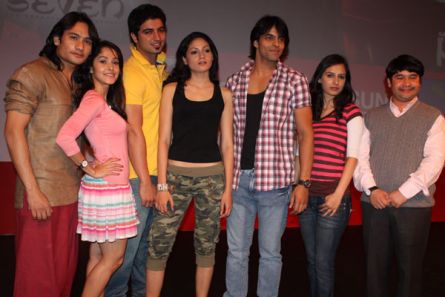 But YRF Creative Head, Ravina Raj Kohli has dismissed these stories as total falsehoods. "We will finish our pre declared number of episodes.  There is no question of it shutting down before, as shooting is still on".

On question of a second season for all shows, Ravina was circumspect and said "There might be one, but it will not necessarily follow the first season's end. Our idea is to have the American model of taking a break and coming back with next season's after a while."  Tellybuzz had reported earlier that the second season is already under plan.  Some shows (Ristha.com) might be taken off while few will continue.

None of the YRF shows ( Mahi  Way,  Powder )  have raked in the  TRPs.  Apparently Yashraj has also spent huge amounts of money on these shows. Seven supposedly cost Rs 32 lacs per episode. "They have shot the whole thing like a film, this budget must have caused the production house huge losses," said an actor on terms of anonymity.

Shruti Seth who plays the lead in the marriage bureau show Rishtha.com is quite disappointed. "I guess they only want to see grandeur on the big screen, and want only mundane stuff on TV."  On YRF she says "They should be felicitated for trying something different.   Such attempts are required, if everybody plays safe how will the industry progress", she ends.

Pushtiie who plays the lead character in Mahi Way also admitted that the low ratings may have given a jolt to the channel and production house. When asked on the possibility of second season she also was cagey and just quipped" Right now I am too busy with the shooting of the climax of the season."

dkmystery 10 years ago Indian audiences are really...
1st they want something better, n when they get it, the TRPs are low :(
I want the 2nd season of Seven!

sunaina02 10 years ago Indian TV audiences are queer. They like to see walkie talkie rainbows all the time .

YRF shows were good and modern and technically much superior .

Aabha.M 10 years ago mahi way has so much of potential...i love...idk whats the prob wit the viewers..all they want is rona dhona stuff and saas-bahu saga.....YRF shows gave us a new horizon!!

youth_showsfan 10 years ago YRF shows were aussum some different shows were on air they were not typical saas bahu shows they were interesting to watch specially youth liked it they wernt melodramatic at all all the shows should have second season.

bmtdluver 10 years ago really really really happy that seven will continue. They better come back with a second season. But i DON'T like the idea of a break between the seasons.....

I really hope Sony continues these shows, because seven, rishta.com, and mahi way are shows that my family and i look forward to watching since they are a change from the regular family dramas.

LRC92 10 years ago These 2 shows have so much potential! They better not take it down after 26 episodes only.

I like Mahi Way as well. But if it goes down, it's fine. However, I would love Rishta.com & Seven to stay put. They are AWESOME!!

4rosegirl1 10 years ago omg omg noooooooooooooooooo i love mahi way and rishta.com omg there better be more seasons for those two.