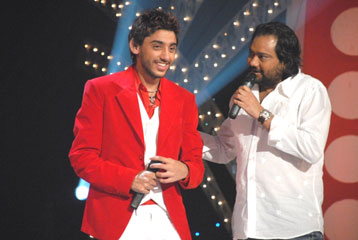 Friday 24th in SaReGaMaPa it’s the romantic songs as the theme. Aditya Narayan and all the contestants start the episode with a performance on “Salaame-e-Ishq”. But it’s also the frightful Friday where one contestant gets eliminated from the contest and from this round the format of the show changes for “Trishanku”. There won’t be any bottom three. Instead there would be a globe of fortune which is going to show the face of the selected participants. This week Aneek beats Raja in voting with Aneek being the topper and Raja, falls down to second position. Performance wise, Aneek once again gives a flawless performance for In Dino from Metro and Amanat steals the heart of the viewers by singing “Tum Dil ki dhadkan mein” from Dhadkan. Raja brings the memory of love between village girl and boy by singing “O ri chori” from Lagaan, while Harpreet sings “Dil ne Tumko chunliya” from Jhankaar Beats, one of the hit romantic songs composed by his mentors. Sumedha is not far behind as she gives the feel of romance to the song “Chup ke se” from Saathiya.

Again on Friday Himesh drags the love story issue when Aneek comes on stage. But this time Aneek confesses that yes he loves someone. Like the previous week, even this week Vishal makes objection on Himesh’s comments. He maintains that that this being a musical show, other issues should be kept away from the platform. Himesh in turn inspires Aneek to sing like Amanat Ali and Raja Hasan. 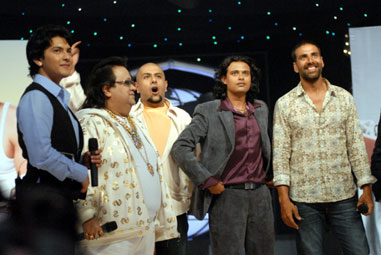 On Saturday the special guest is none other than Akshay Kumar, who has come to promote the movie “Heyy Baby”. The contestants sing all songs from Akshay’s movies. To give the tribute to the khiladyon ka khiladi, Harpreet sings “Wada raha sanam” from the film Khiladi and on the sets Akshay discloses to all that it was Bappida who got him the break in the film Khiladi. Amanat sings one of the most hit songs of Akshay, “Tu cheez badi hai mast” from Mohra. Be ready to tap to the tunes of Sumedha, as she sings “Gela Gela Gela” from Aitraaz and Raja’s “Kiss Me Baby” from Garam Masala. The show stealer is Aneek as he impresses Akshay with his performance on the song, “Mast Kalander” from Hey Baby and gets full points from all the opponent mentors in the guru graph. The participants have a great time with Akshay while Akshay in turn does all to keep their spirits high and also encourage them.

Who will be the unlucky one to perform last time on this stage?? Who steals the heart of the viewers with their performance?? And what is in the store of the Triangular love story?? To know all this and more, do not forget to watch the Friday and Saturday episode of SaReGaMaPa at 10 PM only on Zee TV.

+ 2
14 years ago wow the show must a gr8 one this week. I loved the concept of romantic theme the stage were decorated so nicey. I'm soooo sad that junaid was elimenated.

14 years ago akki will make the show fun..gr8 cant wait to watch..

14 years ago Why aren't they being mentioned in the Preview, are they voted out already or weren't they noticed?

+ 2
14 years ago SRGMP is gonna b great this week but why did aneek say yes??? its so onvious himesh pressurized him!!! anyways akshay seems fun!! lets wait...poor junaid!!!

14 years ago awesome article
I'am very sad to hear that Junaid is eliminated ..i think Amanat is going very good so far!

14 years ago Saturday's episode is going to be the best one... i just can't wait to watch this episode

BRETT LEE 14 years ago THIS WEEK JUNAID IS ELIMINATED AND TRISHANKU WERE SUMEDHA , HARPREET AND JUNAID

14 years ago Why is there never anything mentioned about mussarat?/

+ 4
14 years ago its gonna be sad vote out tonite..i feel like not even watchin it:(