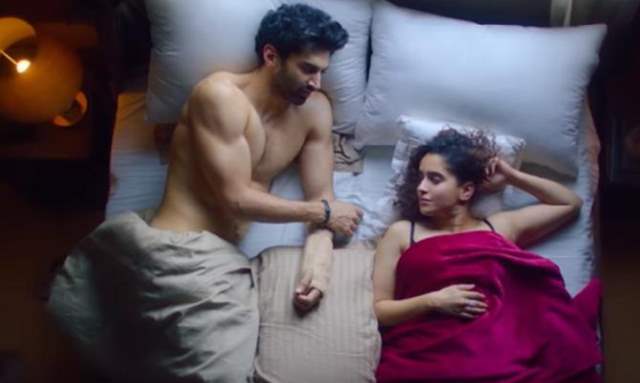 Sanya Malhotra and Aditya Roy Kapur have impressed her fans with the release of their much-awaited film LUDO. The fresh pair was showered with positive reviews from all corners and their sizzling hot on-screen chemistry has exploded the screens.

The duo’s sizzling chemistry has left the fans wanting to see them being paired more often. During a recent interaction with SpotboyE, Sanya spoke about her intimate scenes with Aditya Roy Kapur.

I didn’t know him, but when I found out that Adi would be doing it, I was really happy. He’s a very good actor, and my god, he’s so good looking. Who wouldn’t be happy to work with such a good actor and such a handsome person? I was really happy, but my friends were happier.

In the film, Sanya and Aditya play former lovers whose sex tape is leaked online. They go on a mission to have it removed days before her marriage to another man.

Asked about filming the sex scenes, Sanya said, “If the script requires these scenes, I don’t mind it. But I wouldn’t say that it’s a cool situation. There’s definitely some hesitation and nervousness because we’re surrounded on set by so many people. The lights, the cameras, that makes me more nervous.”

The duo’s sizzling chemistry has left the fans wanting to see them being paired more often. During a recent interaction with SpotboyE, Sanya spoke about her intimate scenes with Aditya Roy Kapur.

LUDO features the story of four distinct personalities with four different stories that overlap at the whims of fate, or by chance at the hands of one eccentric criminal. Apart from Sanya and Aditya, the movie also featured Rajkummar Rao, Abhishek Bachchan, Rohit Saraf, and Pankaj Tripathi in pivotal roles.

Meanwhile, on the work front, Sanya Malhotra will be seen in Guneet Monga's Pagglait and then Love Hostel opposite Vikrant Massey next as she has a lot in her kitty to impress us with.

pyar-ishk 7 days ago I see someone been working out very well. LOL Way to go Aditya