View Profile
Mumbai, Jan 15 (IANS) Having developed his muscles, tattooed his forearm and formed a steely determination to move away from the lover boy image, Aftab Shivdasani has signed a three-film deal with Sanjay Gupta's production house. 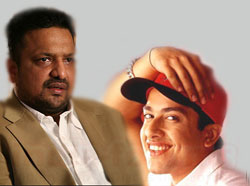 Apart from signing Aftab in a gritty Chicago-based production called 'Jazbaa', which will be shot in summer, Gupta plans to utilise the actor in other gritty ways in the coming months.

Gupta has also got Aftab a film with Tigmanshu Dhulia, which is a remake of the real-time, real-guts cop movie 'Training Day' for which Denzel Washington had got an Oscar for best actor. The role of a villainous cop would require Aftab to go all-out in a negative role.

So is Aftab, currently struggling to keep a foothold in the film industry, Gupta's new blue-eyed boy?

'Well Arjun Rampal is more my blue-eyed boy than Aftab. But I really believe in Aftab and Arjun. I believe they've been doing the wrong kind of films and have a long way to go,' Gupta told IANS.