Pune, Nov 29 (IANS) A visibly happy Sanjay Dutt walked out of the Yerawada Jail here at 9.50 a.m. Thursday with his friend Yusuf Nalwala after 22 days in prison. The Supreme Court had Tuesday given bail to the Bollywood star. 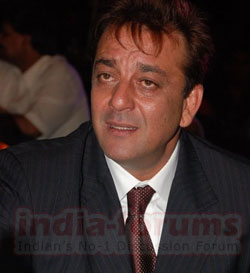 Featured Video
Dressed in a white kurta and a pair of blue jeans, Dutt -- sentenced to six years in jail for possessing illegal arms just before the Mumbai blasts that killed 257 people in 1993 -- chose not to talk to media persons but waved to the crowd while getting into a Toyota Innova. However, none of actor's family members came to pick him up.

The 'Lage Raho Munna Bhai' star -- who has appealed against his conviction -- is taking a private jet to Mumbai from Pune airport, a 10-minute drive from the jail.

Dutt's lawyer Satish Maneshinde, who reached Pune Thursday morning, told IANS: 'We are very thankful to the media for being patient and understanding while dealing with our mood swings. We appreciate your persistence.'

Dutt had to spend an extra night in jail as processing of the bail amount and surety at the special anti-terror TADA court in Mumbai took a little longer than anticipated Wednesday after Special Judge Pramod Kode issued release orders for Dutt and 16 others who were granted bail by the Supreme Court Tuesday.

To ensure that the convicts are granted bail at the earliest, the apex court had directed that the orders be sent to the anti-terror court in Mumbai through e-mail.

The special judge had fixed the bail amount and surety for the 17 on par with that furnished by them during the course of the trial.

Dutt had paid Rs.500,000 earlier as surety when he was granted bail for the first time by the Supreme Court in 1995. He had to furnish the same amount this time.