The video is an intrinsic part of the plot in 'Woodstock Villa'. Sikandar Kher makes an impressive debut with this film.

A source reveals that when director Hansal Mehta approached Sanjay Dutt for the song, he was so impressed with the song 'KYUN' composed by Aryans that he agreed to shoot for it immediately. 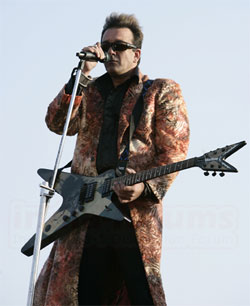 
According to the director of 'Woodstock Villa' Hansal Mehta, he could only see Sanjay Dutt in that particular song, since it was a crucial element in the film and through the song the twists in the story slowly unfolds. He reiterated that it is not an item number that will roll out at the end credits of the film.

Even the director felt that since Sanjay Gupta was so adept in directing songs with Sanjay Dutt, he wanted him to direct again in 'KYUN'. Incidentally all the songs shot by them together have been chartbusters, and the director is confident that 'Kyun' too will be another landmark song.

The song 'Kyun' has been shot at "Pauna Lake' near Kamshet Dam on the outskirts of Pune. One of the unit members reminisces that Sanjay Dutt was natural with the guitar chords and notes, and played it like a true pro.

Infact amongst the 3 guitars, Sanjay Dutt picked up the world best selling electric guitar 'WASHBURN DIME'. It was a special Starfish shaped blue flame top guitar, and suited Sanjay Dutt's image to the T. And with the flowing red coat, Sanjay Dutt looked every bit of a heavy metal Rock star.

Hansal Mehta adds that "Sanjay Gupta has shot the song which has tremendous energy and style. And the way he has presented it does full justice to the song. Infact Sanjay Dutt and Sanjay Gupta bonded so well because they had similar music tastes and are music freaks."

Another unit member adds that Sanjay Dutt looked as natural as a rock star with the guitar that no wonder he had won a championship in the U S as a terrific 'Air Guitar' player." Sanjay Dutt is also known as a music freak especially into Rock, Heavy Metal & Jazz, and Blues & Soul.

No wonder than Rock star Sanjay Dutt is all set to rock in 'Woodstock Villa.' - (SAMPURN)