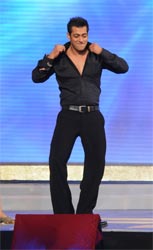 While promoting Veer during Sony's CID Gallantry Awards, Salman Khan gave a side-splitting explanation on why it was so easy for the British Empire to capture India…

Salman told to a very attentive audience, "We have an obsession with fair skin. We have it today, we had it yesterday. The Maharajas had it."

Then Salman threw the nuclear bomb as he went on to say, "That's why India came under the British so easily. All the Maharajas got blinded by the white-skin of the British ladies. Woh log unke peeche peeche bhaagte rahe aur doosri taraf India ko un goron no apne kabze mein kar liye (Our Maharajas kept running behind the white ladies and from the other side the white men conquesred India)"

So now we have solved an age-old riddle that even the great historians couldn't solve, haven't we?

12 years ago 100% true Salman Bhai... Mostly indians are crazy about look and skin colour... they are so beauty concious..!!
Very seldom to find one like you, Salman Bhai..!:D

12 years ago Hah! I never in my life come across this kinda logic.

+ 2
12 years ago somebody donate some brains to Indian men...

yamini_sunshine 12 years ago SALAM IS JUST THE VERY BEST
HE IS SO ADORABLE MAN!

+ 5
12 years ago lmao... salman always has grea tanswers... i'm sure historians are prolly not happy with his version!

12 years ago Quite true,I agree a hundred percent with Salman.That is why bollywood copies hollywood.Our music dir.have nothing original all taken from popsingers of America and recently some european friends had come to our friend's party and everyone was talking about how beautiful the couple was and how cute were their kids and non talked about any good-looking Indians whereas there were better looking Indians than that couple.Besides when ppl see an Indian girl who is fair eventhough she doesn't have sharp features many of the ppl.say 'oh she is beautiful' or ' oh she is very beautiful' depending upon how much fair she is.But they will never say such a thing for a dark girl.It is good that someone like Salman atlast made this cynical remark on our national character

12 years ago so true. Even today most of the Indians agree that they get smitten by whites. That certainly was one of the reason. Over all Indians are greedy and look for short term benefits .ex. whats in it for me and how much i can benefit from it. Maharajas did not look for the greater good of the country and what ever happen is a history. Most of the Indians are also very transparent people.
Good ans Salmanbhai.....