View Profile
Ever the man on a mission, B-Town's hottest humanitarian, Salman Khan, is all set to take his Being Human foundation to level next!

Along with Being Human paintings, a clothing line, watches and other such daily wear accessories that 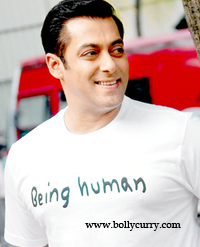 were previously put out to the public, Sallu kicks things up another notch, and in style! Latest buzz is all about him opening a chain of eateries in the name of his charity.

According to sources, Salman has grand plans to open a Being Human cafe soon. The first one is most likely to be launched closer home in Bandra.  Apparently, the real estate acquired for this first cafe will be bequeathed to the foundation and proceeds from the food sale will also be used for charity.

Sources are saying also, that if and after the success of an initial Being Human cafe in Mumbai, Dabangg Khan definitely plans to expand, but scouting off for properties in various other cities to establish a chain.

This project is very close to Salman's heart since it combines two things he is extremely passionate about, charity and food! Sallu is likely to personally supervise the menu for the cafe which is also claimed to offer some of his personal favorite grub!

With delicious food in the offering and such a good cause to boot, we're 100% sure Salman's newest venture is going to be a runaway hit with the masses!