With one of his favorite co-stars Karisma Kapoor sharing screen space with him, Salman Khan was in his elements on Sony's 10 Ka Dum. 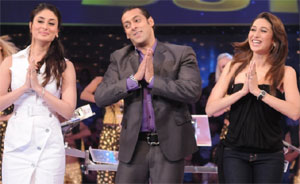 The duo who have a long list of flop films to their credit has no qualms at all in listing them. Says Salman, "But one film with me and it turned her career – she became a great star".

Salman complimented Karisma on her great looks even after marriage and being a mother, but hoped that she would put on some weight now. In his usual witty self, he asked her, "Don't they feed you at home?".

But the advice that took the cake and applause was when he told both the girls, "Don't stand in front of a fan – or else you might just fly away".

Watch all this and much more this Saturday May 30th, at 9 PM only on Sony Entertainment Television..

white-heat 11 years ago I don''t understand how or why Kareena is called size zero, I mean really? She looks just about ok.
Even Karishma is thinner than her.
But I do think that ''thin'' is becoming the new ''fat'', there was a time when ppl used to make fun of fat people, it seems the other way round now.
Life does go round and round in useless circles.

Karisma is very pretty. Kareena is also pretty but not prettier than karisma(:

yamini lovs ksg 11 years ago This content is hidden.