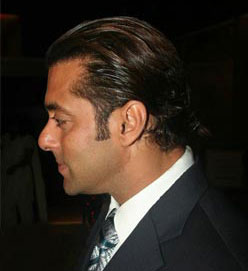 Bollywood's own fashion guru Salman Khan is once again set to make a new style statement, this time, with a ponytail. Salman Khan was spotted with the new coloured hairdo at the music launch of veteran filmmaker Pahlaj Nihalani`s film, Khushboo-The Fragrance of Love. The star was at the event to show his support for Nihalani, who completed 30 years in the film industry.

The star's cool hair style quite matches with Shah Rukh Khan`s ponytail in his Krazzy 4 item song. According to sources, the new look may be for his upcoming children's flick 'Tarzan'. Salman Khan aka Sallu has always been experimental with his hairstyle. His 'Tere Naam' look was crazily copied across the country and so were his closely cropped hairdo or sleek long locks. Wonder what the tiny ponytail of the cool dude would do to the nation crazy for Sallu.