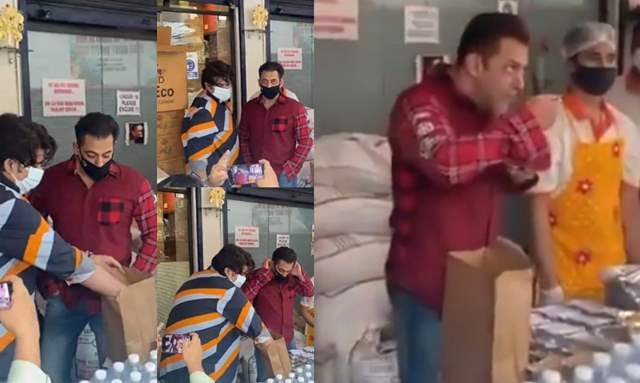 After reviving his food trucks for the frontline workers, Salman Khan has personally stepped up to make sure everything is done perfectly as the actor’s team is distributing 5000 food packets. In a viral video, Salman stepped into the kitchen to taste the food as a part of the quality check.

A viral video of the actor tasting the prepared food and checking the packages is going viral on the internet. Yuva Sena leader Rahul Kanal, who is coordinating the endeavour with the actor, was also seen along with the Bhaijaan.

Earlier, Kanal had shared that Salman Khan got into the action as soon as the state government imposed a junta curfew from April 15.

“Salman expressed his concern for the police officers, BMC staff and health workers on duty. Given their long work hours, he wondered how they would procure essentials since most shops are shut and the grocery stores are functioning in the stipulated four-hour window. Within 24 hours of our conversation, our food trucks hit the road,” Kanal told Mid-Day.

While the nation is reeling amid the second wave of novel Coronavirus, Khan who is often known for his humanitarian initiatives is once again helping the community and underprivileged people in the nation. He has extended his efforts to help the needy and underprivileged people in Mumbai with food distribution through his food trucks 'Being Haangryy'.

+ 4
3 months ago I really don’t like Salman Khan in a lot of instances and don’t prefer most of his movies. But he is living proof that rarely are human beings one dimensional. Even someone with his turbulent history is known as a staunch friend and he himself does many charitable works. Isliye it’s important we spread love and not hate, even with easy access to Internet these days.

3 months ago Proud of him...a true being human