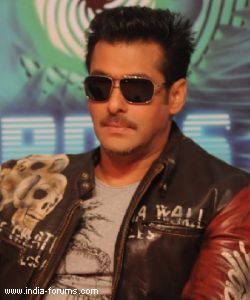 Recently it was announced that Salman Khan will be a part of Bigg Boss 5 only for two episodes. He had won the hearts of the both contestants and audiences last season. It was said that both Sallu and Sanjay Dutt will jointly host the next season of this highly popular Colors reality show, which packs 13 controversial contestants in a locked house. Since then there has been speculation, whether Salman will be part of the whole season or not.

Sanju  Baba who is making his TV debut with this Endemol produced project has settled the speculation by declaring that ,"Sallu will be there only for two  episodes to introduce me, later I will take over. "

He starts shooting for the promos from  next month.

When asked how he will approach the show which was earlier hosted by Shilpa Shetty and Amitabh Bachchan as well? Sanju says, "I will be my funny self; there will be no serious gyaan."

He admits he is bit nervous, "I said yes to the show as it not only helps me to directly connect to my audience but it is something that I have not tried before."

On the show, this 51 year old actor says, "Though, I have not seen earlier seasons ( He is not a  TV buff), it  is apparently very popular, the TRP (Television Rating Points) speak for themselves. My family members (sisters) are also ardent fans, they don't see anything else when the show is on."

Sanju is also on a high these days; the success of Double Dhamaal has reinforced his comic image. He is next awaiting the release of Chattur Singh Two Stars, where he plays a goofing cop who thinks no ends of himself.

+ 3
9 years ago would have loved to watch Sallu-Sanjay duo on tv! but nonetheless excited to watch the 1st two episodes :D and later for Sanjay...can't wait to see how he uses his charm with the audience...after Salman, it might be a bit difficult, but i'm sure he'll be good!

aakriti715 9 years ago WELL...I WANT MANISH PAUL TO HOST THE SHOW...& YEAH I KNOW ITS IMPOSSIBLE BUT HE IS A GOOD ANKER

+ 2
9 years ago Oh, well guess I'll only be watching those two episodes, unless they're good contestants this season or if Sanjay Dutt is actually a good host.

+ 5
9 years ago Well its okay if you guys want Sallu to host the show.. I want that too but why are you people insulting Sanju? He is an amazing actor and I am sure he wouldn't be a bad host either.. at least give him a chance..

+ 4
9 years ago What! I want more of Sallu! I dont have any probs with Sanju baba but Sallu should be there too! Please tell me this is a joke

+ 4
9 years ago I have seen couple of his interviews and i find him very arrogant...Dont think this will be his cup of tea

He was so funny in the last season..

+ 4
9 years ago nooo , we only want Salman in bigg boss 5 ... Salman is better n he is the BEST ,, bigg boss belong to Salman only , he is the best host for bigg boss , no one esle ... we want to hear Salman saying " Welcome to bigg boss season 5 " as he used to say " welcome to bigg boess season 4 ( char ) " ... we only want Salman not sanjay .. last season was super hit just bcz of our Hero Salman , n the trp was very high .. if sanjay going to host then the trp will b very down n the show will b big flop ... am not gonna watch bigg boss this season if Salman not hosting the full show , i'll only watch the episodes which r Salman is hosting ... love u Salman ... we want to see u again in Dus Ka Dum ^_^