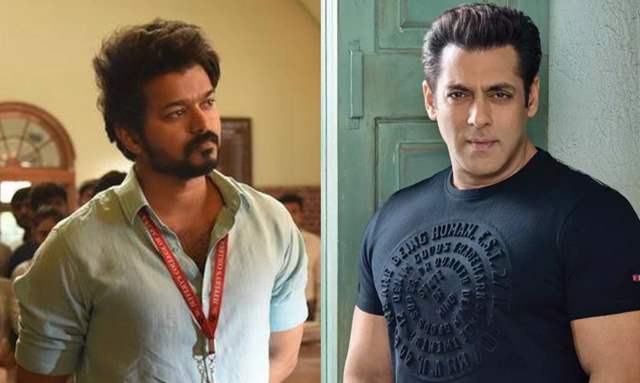 South superstars Thalapathy Vijay and Vijay Sethupathi fronted Master is reportedly gearing up for a Hindi remake and the star cast is yet to be announced by the makers. The remake will be backed by Kabir Singh producer, Murad Khetani and Endemol Shine and two top names from Bollywood, making it one of the biggest hero vs villain events upon its release.

However, now a recent Pinkvilla report suggests that Team Master is keen to have Salman Khan to board the film.

“Murad and the team of Endemol have had a couple of meetings with Salman Khan over the last 30 days, to discuss Master with him. Salman has liked the concept of the film, and has shown keen interest, however, is waiting for the team of Master to come to him with a bound script in Hindi, as a lot of elements from the Tamil original have to be tweaked to suit the sensibilities of Bollywood audience,” revealed a source quoted by Pinkvilla.

Thalapathy Vijay performance and his screen presence in the original, has impressed the fans that can be justified by very few superstars in Bollywood, and the reports say it is one of the major reasons why Salman was the obvious first choice for the team.

“Salman’s aura and personality suits best for the role of Master, and that’s exactly what the makers also felt. The discussions are in the very nascent stage, and Salman will make his decision on doing or not doing the film only after hearing the screenplay narration. The team of Master is currently working on rewriting the script – tweaking the second half of the original, and editing the rather longer portions to keep the runtime in check-in Hindi. The next narration with Salman is expected to take place in a couple of months,” the source added.

The recent report also mentioned the source talked about Master remake’s schedule and the film may go on the floors around the month of February/March next year.

“If everything falls in place, Master will be Salman’s next after KEKD and go on the floors around the month of February/March next year. Apart from Master, he is reading a couple of more subjects, to block the date in Q1 of 2022,” the source concluded.

On the work front, Salman is gearing up for the release of his upcoming film Radhe, in Eid 2021 and the theatrical trailer is likely to be released soon. While the actor is reportedly on a break from his Tiger 3 shoot, the 55-year-old actor is expected to resume the shoot in the second week of April in Mumbai.