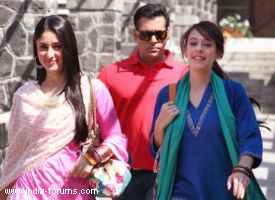 Mumbai, Sep 10 In Bollywood, every actor tries his best to reach the top of the ladder and become number one, but according to Aamir Khan, who himself is credited with blockbuster hits like 'Ghajini' and '3 Idiots', Salman Khan is presently the number one box office star.

'According to me Salman is ahead of me. In the manner in which his film 'Bodyguard' has got an opening, it has broken all records and today according to me, if there is anyone who is the number one box office star, then that is Salman,' said Aamir.

'He has proved with this film that he is ahead of all of us. I am very happy that his film is doing well. My good wishes are with him,' Aamir told reporters here at the music launch of the film 'Saheb, Biwi Aur Gangster',' he added.

'Few days back I even had a chat with him on phone because he is in America. I'm glad that his health is also much better now. Infact I was the one who gave him the good news of the massive opening box collections of 'Bodyguard',' said Amir. 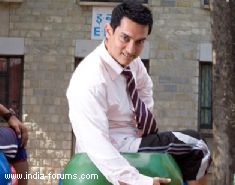 'I had texted his sister Alvira and I had told her that when Salman comes out of his surgery then show him my text first. I wanted to be the first one to give him this great news,' he added.

When asked from the 46-year-old actor that since he shares such a great camaraderie with Salman, would he like to work with him again in a film, Aamir responded with a yes.

'I would love to work with Salman. We have a great tuning so if we work together, it will be great fun. But till the time we don't get a good script, a script that excites both of us, we can't work together,' said Aamir, who has shared screen space with Salman in the past in the film 'Andaz Apna Apna'.