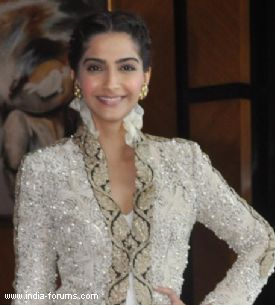 Actress Sonam Kapoor, who had teamed up with Salman Khan in her debut movie "Saawariya", will work with him once again in Sooraj Barjatya's next directorial. She praised the superstar as "hot" and said the film will be "Double Dhamaal".

Sonam told IANS: "He is hot. It's double 'dhamaal' with Salman since he is in double role. I am super excited to work with him. I am not allowed to talk about it. You will see. He is looking good in the film."

The film will be directed by Sooraj Barjatya.

Meanwhile, the actress is trying something different with her next film "Dolly Ki Doli" as well.

She said: "It's interesting...I hope people can digest it because we are trying to do something different. Doing things different is always scary."