With a favorable 2010 put behind him, 2011 is looking every bit as high and positive for Salman Khan. After featuring in Dew's latest stunt gimmick for their tele-advert, buzz has it that the actor has been signed for Yash Raj Films' next project which is set to be a Kabir Khan (of New York fame) directorial. 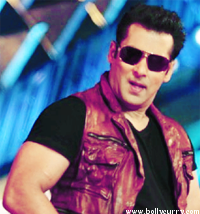 Apparently, this powerful production house has been rather keen to sign the macho Khan and bring him aboard their project for a while now, and rumors claim that in their efforts to convince the actor for this deal, they have offered Dabangg-Sallu as much as 33-percent of the film's profit!

Sources of hear and say claim Aditya Chopra and Kabir Khan to have paid Salman a personal visit at his home, to finally get his nod for the project. Apparently, with the deal and the script have been quite appealing to the macho-man, YRF and Salman's alliance has worked out to mutual benefit.

Bollycurry wishes Salman much luck for his future projects and hope 2011is a huge success for him!