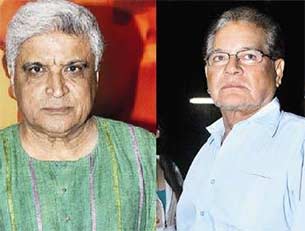 It was a historical moment Thursday when Hindi cinema's celebrated scriptwriters Salim Khan and Javed Akhtar came together after decades to unveil the first trailer of 3D version of their cult film "Sholay".

"It's great 'Sholay' is coming in 3D. If we have a new technology, it's good if we make use of it," Salim Khan told reporters at the launch.

"Even black and white films were converted into colour, so why not," he added.

The 3D version is slated for a Jan 3 release.

Talking about the 1975 action drama "Sholay", a landmark film in the history of Indian cinema, Akhtar said while scripting the Amitabh Bachchan and Dharmendra-starrer, they were not aware that a script can have another version too.

The famous scriptwriter duo also wrote commercially successful films like "Zanjeer" and "Deewaar" before parting ways about 32 years ago.