Sajid Khan is an inimitable multi media personality indeed. Recently he regaled Bollywood with his rib ticklers at an award ceremony, which was televised recently.

Sajid as the host along with Shreyas Talpade added zes 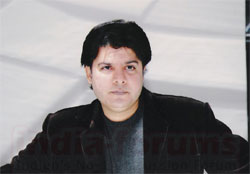 Featured Video
t and zing to the proceedings with their hilarious act.

Everyone unanimously agreed that Sajid, as a host was witty, clever, sharp, intelligent, quick on his feet and outrageously funny. He was a virtual springboard of wise cracks and razor sharp one liners.

In fact, one senior journalist very aptly rounded his piece on the award ceremony by saying, "And when the show came to an end, I heard people raving about just one person-Sajid Khan-the show stealer.Laughter clearly can provide the winning edge.”

But besides proving to be a good entertainer, Sajid Khan has proved that entertainment runs in his blood. He has proved that he is a competent director with his debut film 'Heyy Babyy' being in the Top 10 highest grossing films of all time by a debut director.

And if his first film has proved that he has got the pulse of the audience, he is presently working on the draft of his 2nd potential blockbuster film as well, with the winning combination of Sajid Nadiadwala and Akshay Kumar.

Sajid Khan, the entertainer or Sajid Khan the director –he seems to be fit enough to play any role! (SAMPURN)