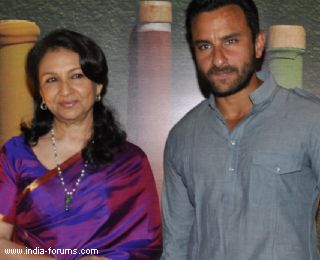 Seven months after the demise of former Indian cricket captain and Nawab of Pataudi Mansoor Ali Khan, who had a royal connection with Bhopal, his wife Sharmila Tagore and actor son Saif Ali Khan have successfully established a deep emotional link with people of the City of Lakes that goes beyond the royal heritage.

This time the mother-son duo had come together for the first time. Saif, a Bollywood star, and Sharmila, a 1970's actress but locally addressed as Ayesha Begum, were seen freely intermingling with hundreds of ordinary citizens in city last week.

Sharmila was spotted visiting mosques and gardens that were built by Pataudi's grandfather and other members of the Bhopal royalty.

The former actor was dismayed when she visited the grave of Nawab Hamidullah Khan in the vicinity of Sofia Mosque. A huge garden that was bursting with life when Tiger's mother Sajida was Bhopal's regent, is a picture of neglect and waste. Sharmila wants the old glory to be restored.

The mother-son's quest to connect has however been far from smooth. Barely a month ago, Saif was shown black flags by some disgruntled elements in Bhopal. The actor was in Bhopal to promote his film "Agent Vinod", and oblivious of a controversy surrounding his family's handling of 'Rubat' - two prime properties belonging to nawabs of Bhopal in Mecca and Madina.

In 1819, the first woman ruler of Bhopal, Begum Qudsia had constructed accommodation facilities for Bhopalis in Mecca and Madina. Till now most Hajis from Bhopal stay free of cost in these two buildings, which can accommodate 300. Nawab's Qudsia's will was that a Bhopali should look after these accommodations.

However, after Tiger Pataudi's death in September 2011, the caretaker of these Rubats in Saudi Arabia was changed to a Saudi national, causing disquiet in Bhopal. A delegation of religious leaders had visited Mecca-Madina but the issue was not resolved to the satisfaction of everyone concerned. Subsequently Sharmila intervened making it clear to the Bhopal city qazi and other religious heads that their views would be honoured. The issue has been resolved amicably now.

Bhopal's Congress MLA Arif Aqueel also praised Pataudis. "Begum (Sharmila) you must communicate directly to us and more often. Intermediaries and cronies tend to complicate issues for their vested interest. You belong to us and we belong to you," he said.

In his brief speech, Saif addressed Bhopalis, "I am quite moved with your initiative of starting the Nawab Mansoor Ali Khan Award for outstanding and valuable contribution. I want to congratulate you, Aamir Ahmed Khan - you may be an unsung hero but what I learned of you, you are our real role model. May Bhopal produce many more young men of character like Aamir and I am there to sing for your contribution."

Sharmila too told the gathering, "Lets us take this Tiger Trophy to greater heights in the times to come. I am in all appreciation for this award in my husband's memory, who had always admired selfless, purposeful efforts."

Tournament organizer Hamidullah Khan said Sharmila and Saif's decision to award a 'Real Achiever' from society has gone down very well with Bhopalites.