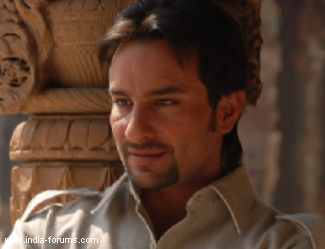 A day after being involved in a scuffle in the Taj Mahal hotel, actor Saif Ali Khan said he was "sorry" and regretted he didn't resort to "Gandhigiri" - but insisted it was definitely not a publicity stunt for his upcoming film "Agent Vinod"!

The actor said he reacted only after friends of South Africa-based Indian businessman Iqbal Sharma misbehaved with his women friends.

"I think I could have reacted to the incident using 'Gandhigiri'. But that time the situation was worse. I am not saying that I am totally innocent but I was not guilty alone," Saif, who was arrested and bailed out late Wednesday, told reporters.

"Media is being partial reporting about the incident. I was hit first. They misbehaved with us and even used abusive language. I have also lodged a complaint and the matter is in court so I request media not to give any biased report until court's decision comes," he added.

Amid high drama, the 41-year-old was arrested Wednesday evening with two others -- Shakeel Ladak and Bilal Amrohi for assaulting Iqbal Sharma at Wasabi, the Japanese restaurant at Taj Mahal Palace.

Police detained Saif, Amrohi and Shakeel at the Marine Drive police station, and later brought them to the Colaba police station. The interrogation of the trio about the incident early Wednesday lasted an hour.

Later, the actor and his two friends were freed on personal bonds of Rs.3,000 each.

According to sources, Shakeel had hit Sharma's father-in-law in the scuffle.

Shakeel and Bilal's lawyer Mahesh Vaswani told IANS: "Iqbal and his group of people were passing comments on the girls (Kareena Kapoor, Amirta Arora and Malaiak Arora Khan who were part of Saif's group), and that started the incident."

Saif's girlfriend Kareena was with him and she reportedly cancelled her shooting at Film City to avoid media.

On his part, Saif said he had only "defended" himself after being "assaulted".

A battery of top police officers were waiting for the actor at the Colaba police station, besides the media and scores of fans.

In the afternoon, police sent a team to Saif's house and after failing to locate him there, ordered him to appear before them as early as possible.

Saif was virtually declared 'wanted' when he went incommunicado after assaulting Sharma, who is also the director general and CEO of the Trade, Industry & Investments of South Africa.

The actor has been charged under various sections of the Indian Penal Code for allegedly assaulting Sharma and police said that a case of assault had been registered at the Colaba police station.

An upset Sharma told a television that Saif called him an "idiot" for complaining about the actor's loud conduct at a restaurant in the Taj Mahal Hotel.

He said he and his family had requested the restaurant manager to ask Saif and his friends, which included Kareena, Amrita Arora and Malaika Arora Khan, to keep their voices down.

Sharma said he and his family decided to move to another part of the restaurant downstairs.

"As we were going down the stairs, Saif was coming up, probably from the toilet. As he passed me, he called me an idiot and asked 'Do you know who I am?'"

Sharma said the actor first pushed him and then assaulted his father-in-law who fell on the stairs and bruised his jaw.

"It was an uncivilized way to behave in a public space," Sharma said, adding that he intended to pursue the matter legally.

A police officer confirmed that Sharma and his guests had objected to the noise created by Saif and his friends.

Bollywood celebrities, who usually take to social networking platforms to share their opinions on talked about matters, chose to remain away from this issue, barring composer Vishal Dadlani and jewellery designer Farah Khan Ali, who supported Saif and claimed the charges are "unlike him".

Saif has been involved in public spats earlier too, including some photo-journalists in Patiala in September 2008.

The actor has won the Padma Shri award, which did not go down well with the Bishnoi community in Rajasthan as he is accused of killing a blackbuck -- an animal the Bishnois hold sacred. Saif was charged with poaching as the blackbuck is on the endangered list.

Shefali Shah on 'Delhi Crime' being nominated at Emmy Awards ...
8 hours ago