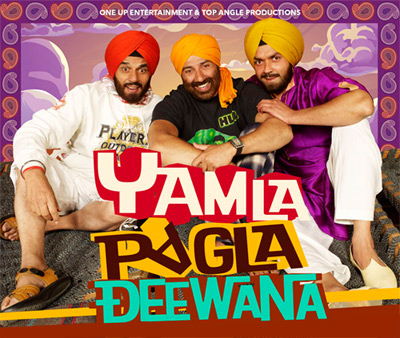 It was expected that the music of 'Yamla Pagla Deewana' will have a heavy dose of Punjabi flavour because of the theme of the movie and the presence of three Deols - Dharmendra, Sunny and Bobby. So no suprises there. Along with that, the music also has rustic connect in a couple of songs.

Composed by multiple composers, the album has 12 tracks.

It opens with the title track, which is a revised and rearranged version of the original 'Main jat yamla pagla deewna' from the 1975 Dharmendra-starrer 'Pratiggya'. Sonu Niigaam has done justice to the classic number and Nindy Kaur joins him for the song that has been contemporarised with additional lyrics and sounds by RDB. Overall an interesting beginning.

The song also has a remixed version called the house mix.

Next is a song, which has four versions. The original song 'Charha de rang' has been sung by Shweta Pandit, Mahalakshmi Iyer and Rahul Seth. The track is already being liked by audiences. Composed by Nouman Javaid, it has a strong Punjabi folk feel. A good hummable song.

In the next version Rahul Seth has been replaced by Rahat Fateh Ali Khan, while the female singers remain the same. The feel is pretty much the same, but Khan's vocals are definitely more captivating than Seth.

Then a solo number of the song is sung by Ali Parvez Mehdi. It is slow with no music. The entire number is just about the vocals.

Finally, the last version, which is again a solo by Rahat Fateh Ali Khan with hardly any background music. Khan uses various variations in the slow version.

Then there is a twist in the album with the entry of item number 'Tinku jiya'. It is composed by Anu Malik and sung by Mamta Sharma and Javed Ali. The song is high on beats and is totally soaked in the rural flavour. But the fast- paced dance number is just average.

To complete any album, a typical love song is a must and 'Yamla Pagla Deewana' does not disappoint. 'Sau Baar', which has Omar Nadeem and Shreya Ghoshal behind the mike, is the creation of Sandesh Shandilya. The romantic track is a likeable soft number that grows on you after a few hearings.

Then comes another item number 'Chamki Jawani' composed by Anu Malik . It has been sung by Master Salim, Daler Mehndi and Mamta Sharma and has a strong mass connect. With the sound of the harmonium taking precedence, the track tries to create a desi atmosphere but fails to be a 'Munni' or a 'Shiela'.

An overdose of item numbers is felt when the album throws up another similar track. 'Son titariya', a fast paced song has complete rustic influences, is full of whistle sounds. Crooned by Krishna Beura and composed by Rahul Seth, it is not a great one.

'Kadd ke botal' has a Punjabi feel. Again a Seth composition, the song has been rendered by Sukhwinder Singh. Full of beats, the pacy number is quite apt to the theme of the film. But it is not very interesting.

The album is concluded with a-minute long Gurbani put together by Sanjoy Chowdhury and sung by Shahid Mallya.

On the whole, the album is apt for the film, but barring one or two songs, it doesn't hold the interest of the listeners for long.