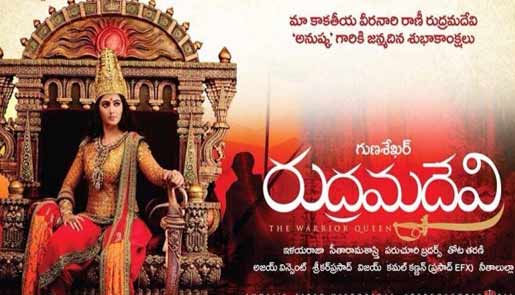 The theatrical trailer of upcoming Telugu magnum opus "Rudhramadevi", which is a period drama about the reigning queen of Kakatiya dynasty, will be unveiled Feb 17 on the occasion of Maha Shivaratri.

"We are unveiling the trailer on the auspicious occasion of Maha Shivaratri. We're busy with post-production work and we hope to release the film this summer," the film's director Gunasekhar told IANS.

Starring Anushka Shetty in the lead, the film is about the story of queen Rudhramadevi, who once ruled the Kakatiya dynasty.

The film, which has been on the floors for nearly two years, is touted to be made on a huge budget.

Also starring Allu Arjun, Rana Daggubati, Baba Sehgal amongst others in important roles, the film is produced by Gunasekhar.

"Rudhramadevi" is being promoted as the first stereoscopic 3D film in India.