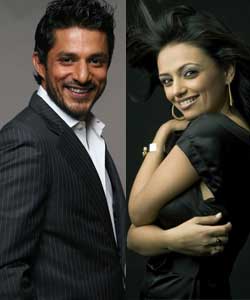 Tellybuzz was the first to break the news about the adventure reality show. We now give you the latest news on Yudi and Roshni hosting the show. There will be 6 teams in total, and each team will comprise of a celebrity and a common man. The 6 celebrities are Karan Wahi, Gaurav Khanna, Rati Pandey, Pavitra Punia, Anupriya Kapoor and Kinshuk Mahajan.

We called Yudi who confirmed the news saying, "Yes I am hosting the show and its fun to be part of such an adventure show. We are shooting in Udaipur a very beautiful location".

Roshni Chopra too confirmed the news, "Its good fun to be part of the show. Last year I did Desi Girl where I was a contestant and here I am hosting the show".

The show will be of 12 episodes and will be a biweekly, wherein the tasks will be shown on one day followed by the elimination on the other day.

Rubina's co-star, Roshni Sahota opens up on her stint in 'Bigg Boss ...

+ 3
9 years ago You are awesome in Afsar Bitiya Kinshuk you rock as Pinto and I hope there is a Bidaai 2 or CCBM 2 with you and the rest of the foursome : )