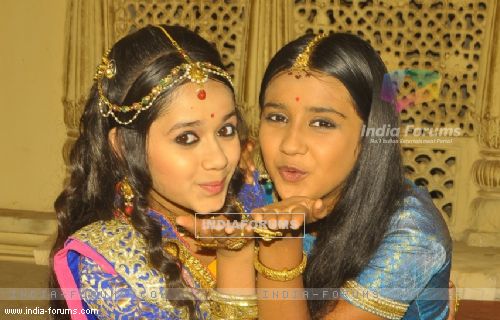 TellyBuzz learnt that Roshni and Jannat are friends from long and their friendship began to bloom after they audition for the show. We spoke to Jannat to know more about the amazing bond of friendship they share with each other.

Jannat says, "She is my best friend and I know her since long before this show. Both of us met in an audition after I did the show Haar Jeet and she was doing the show Main Lakshmi Tere Aangan Ki. Both of us met in an audition and we just greeted each other with Hi Hello. So, from there our friendship begun and we started getting along very well with each other. Sometimes we used to have dinner together. Now, we best friends; just like sisters."

We wondered how both of them react when they first learnt that they will be doing the same show. she said, "I was called for the look test and when I got to know that Roshni is giving the look test for Ajabde then I spoke to Sweety aunty over the phone but I didn't tell her anything. She just told me that Roshni has been called for a look test and she told that I wish both of you were doing the same show. We just went there and surprised her the next day. We were very happy."

May your bond grow with time Jannat and Roshni!

6 years ago Jannat and Roshni, both are so cute. I am going to miss my baccha's so much! Love MP's baccha party!
Love Roshni Walia.
Love Jannat Zubair.
Love Faisal Khan.
Love Yash, Vishal, Purti & Niharika!
Love you all! You guys all rocks!