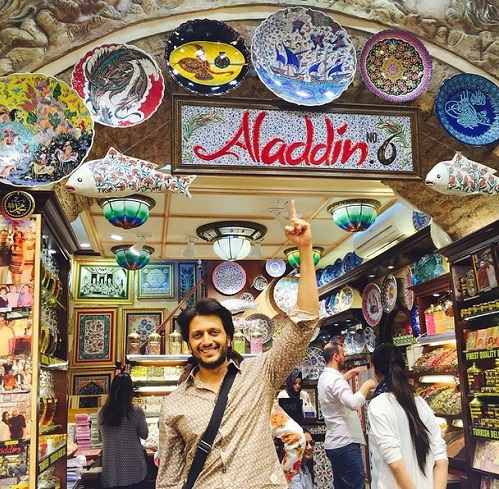 We all grew up watching Walt Disney's animation series Aladdin and with the childish fantasy of having a genie like he did. But, little did we know that such fancy imaginaton did exist.
Yes, you got that right. Aladdin is found by none other than our charming actor Riteish Deshmukh who is out on a vacation with his family in Istanbul. He has been quiet active on social media by sharing photos of the historic city.
Riteish himself had played the character of Aladin Khan in his 2009 Bollywood fantasy adventure film 'Aladin', recently found out a store named Aladin while on his Istanbul trip.
Riteish was seen posting a picture of himself on a photo sharing site with a caption that read: Babu Moshai @sujoy_g -Look what I found - Spice Market/ Istanbul - KaBoom.
Well, surely our Mauli is having a great time enjoying himself in the momentous city.
Priyanka Chauhan