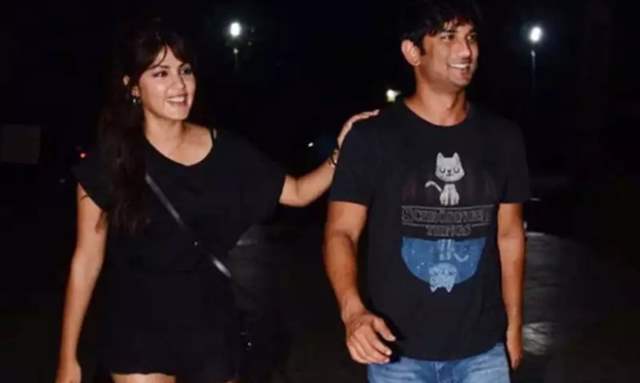 Rhea Chakraborty, who was in a live in relationship with Sushant Singh Rajput had said in her statement that she left the Bandra house in which the duo lived on June 08 2020. In her statements to the Mumbai Police and the Central Bureau of Investigation, the actress had stated that she blocked Sushant after leaving the house and did not meet him after that.

Contrary to Rhea’s claims, a shocking breakthrough in actor Sushant Singh Rajput's death case has come to light. As reported by Republic TV, Rhea Chakraborty’s neighbour has claimed that she was informed by an eyewitness about Sushant and Rhea’s meeting on June 13 2020,a day before the actor’s untimely demise.

Rhea’s Primrose neighbour informed the news publication that an eyewitness, who does not want to reveal his/her identity had seen the couple together on the evening of June 13th when "Sushant dropped her (Rhea) off around 6-6:30 pm." and "Sushant was driving alone and there was no driver." The neighbour also mentions that this crucial information has been passed on to the CBI, who is currently probing Sushant Singh Rajput’s death case.

"The person told me this in June itself before any of this had gone to CBI or even before Rhea had said anything. The person had said, 'Oh! he passed away, I had just seen him drop her off on 13th evening.' Nothing was known at that time that what else will come up. I have not seen anything and Yes, I am Rhea's neighbour."

Previously, Mumbai BJP Secretary Vivekanand Gupta had made some sensational revelations as he had told Republic TV that he has information about Sushant and Rhea's alleged meeting on June 13 and claimed that some eyewitnesses told him that they saw the duo together on June 13 2020.

Republic TV quoted him as saying;

"On the 13th night, there was a birthday of a big politician and another politician has also tweeted about how there can be a party in the lockdown. It means the minister knows there was a party and he knows who all were present. This incident happened on the night of 13th and 14th. Eyewitness have told me that around 2 am to 3 am, Sushant went to drop Rhea till her home. So saying that she left on June 8 is not correct. On the 14th morning, he was murdered and then hanged."

The BJP leader also stated that he is ready to get in touch with the Central Bureau of Investigation probing Sushant's case. He adds that he has already tweeted about everything.