BollyCurry returns with its popular category of Retro Review and this month we bring to you a movie that is regarded as a cult classic of all times. Starring the biggest superstars of the nation, Aamir Khan and Salman Khan, this movie is sure to tickle your funny bone every time you watch it. The film is none other than the comic caper, Andaz Apna Apna. 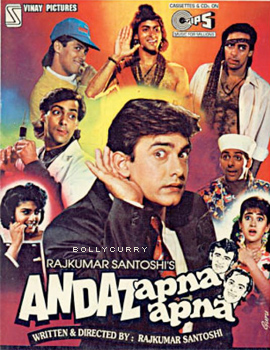 Released on the 11th of April, 1994, Andaz Apna Apna starred some of the most popular actors of the 90s including Aamir Khan, Salman Khan, Raveena Tandon, Karisma Kapoor, Shakti Kapoor and Paresh Rawal. Directed by the talented and popular filmmaker Rajkumar Santoshi, the film was an average grosser at the time of its release and received poor reviews from the critics. However, in times to come, the film went on to gain a cult status amongst the youth and still remains as one of the most loved Bollywood films of all time.
The movie starts off with an introduction to the two protagonists, Amar (Aamir Khan) and Prem (Salman Khan), two good for nothing youths whose only aim in life is to earn a quick buck. On reading the interview of a billionaire's daughter, Raveena (Raveena Tandon), the two young lads cheat their fathers out of a large sum of money and make their way over to woo the pretty lass. Their journey involves a lot of glitches that make up for situational comedy and the entry of Raveena's best friend Karishma (Karisma Kapoor), who has her eyes on Prem and serves to complicate the drama further. Add to this a sinister plot by Raveena's estranged uncle, Teja, and his cronies, Robert and Bhalla, to capture Raveena's property, Raveena and Karishma faking their true identity to Amar and Prem, and Crime Master Gogo's entry right at the climax and you have a hit laughing riot at your hands!
Despite the movie boasting of stellar performances by all the actors, a great plot and brilliant execution, the film failed to perform at the Box Office at the time of its release. However, in the years to come, the audience and critics realized the potential of the film and it went on to gain a cult status. Aamir and Salman's impeccable comic timing, Robert and Bhalla's rib-tickling dialogues penned by Rajkumar Santoshi and Dileep Shukla and a great script eventually earned the film the appreciation it should have received.
While the music of the Andaz Apna Apna was nothing path-breaking, it was definitely enjoyable. The film's music was composed by newcomer Tushar Bhatia and this remains his most successful composition till date. Songs such as "Ello Ello" and "Yeh Raat Aur Yeh Doori" are possibly two of the most famous numbers of the film and are still remembered and appreciated till today as their quirky beats and comic choreography never fails to bring a smile to one's face.
Overall, Andaz Apna Apna was a complete package of comedy, action and romance and it is quite disappointing to note that the film only received due credit many years after its actual release. The movie serves as an inspiration to many and can truly be called one of the best films of Hindi cinema till date.
Did You Know?
Author: Ritchelle C.
Editors: Komal P. and Jenifer Y.
Graphics: Marsh P.