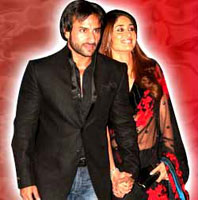 Featured Video
will be having three films with a back drop as 'terrorism.' Firstly its Yash Raj's 'New York' then its Karan Johar's 'My Name is Khan' and one more to go on the list is Rensil D'silva's next that is still untitled.

The film is a romantic thriller with 'terrorism' as backdrop. The film is being shot at Philadelphia, Delhi and currently at Mumbai.


So a lot from well known directors on an exciting subject 'terrorism.'