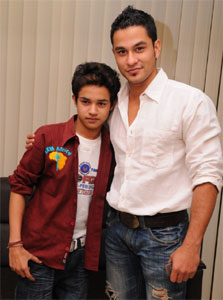 Featured Video
Not everyone can get what they dream of… but apna 'chota don' – contestant Remo Ghosh seems to be having all his dreams coming true ever since he has got selected in Indian Idol 4. This pocket size powerhouse could not believe his good fortune when he met the love of his life – the suave and sexy Priyanka Chopra in the very first Piano round of Indian Idol. He can't stop blushing even now while talking of Priyanka and since then has been dedicating his best performances to her. This has made all the male contestants envious of this 'all of 16' young boy from Nagaland. But what happened recently with Remo takes the cake…

One look at Remo and most people would instantly say that he has a striking resemblance with the 'Superstar' actor- Kunal Khemu (remember the young Kunal Khemu in Raja Hindustani and Zakhm!) and Remo would blush and accept the compliment. He often was asked questions on how he would react if he met the actor one day but what he didn't imagine even in his wildest of dreams that he would be face to face with the actor himself.

To surprise chota don, the team decided to get him to meet actor Kunal. Remo who had recently hurt himself was told that it was a doctor's visit to get a tetanus injection and to get his wounds treated. A scared Remo was nervous and was impatiently waiting at Kunal's office (thinking it is for the doctor), and had no clue of what was in store. Then suddenly he saw a few people get in and thought the doctor had arrived... well it surely was a doctor - Kunal who was eager to see his look-alike and get done with his own curiosity. On seeing Kunal… Remo was stunned… ironically the chatter box suddenly was left with no words and he could not believe what he saw! Kunal came forward and chatted with Remo…  both of them couldn't stop looking at each other. Kunal said "I cannot believe there can be so much resemblance between any two people… it seems like a blast from my past, suddenly my childhood image is there in front of me."

An excited Remo could not believe  that he actually met Kunal… and said: "I came to meet the doctor and get some bitter medicines, but what I got was a sweet memory which will last forever… all thanks to Indian Idol, which truly makes dreams come true!"

Well if this wasn't enough… Kunal even gifted Remo with a special gift and wished him luck and promised to vote for him!