From yesteryears' actresses Madhubala, Helen and Asha Parekh to the new-age heroines like Urmila Matondkar and Kareena Kapoor, are all bound by a common thread - the evergreen voice of Asha Bhosle, who turns 76 Tuesday. 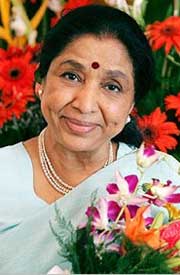 Featured Video
one of the most versatile singers of all times, this Padma Vibhushan awardee has crooned more than 12,000 songs. On the occasion of the vivacious singer's birthday, IANS goes down memory lane to remember some of the her all-time hits.

'Aaiye Meherban' - The sensuous number picturised on then screen goddess Madhubala and Ashok Kumar in the 1958 film 'Howrah Bridge' has the same magic effect today on listeners as it did five decades ago.

'Jaaiye aap kahan' - A beautiful and soulful romantic number picturised on veteran actress Asha Parekh and Biswajeet, the song from the film 'Mere Sanam' (1965) is one of the best songs of Asha Bhosle. Her silken vocals instantly strike a chord with the listeners.

'Raat Akeli Hai' - When we hear this sensual naughty number, it sounds an easy one, but it was difficult to sing as Asha had to change the pace - from slow to fast while singing the song from the film 'Jewel Thief' (1976). But she did a great job and it still finds place on music lovers' favourite list.

'Piya tu' - Asha always gave that extra zing to her voice while singing cabaret numbers, and 'Piya tu' from the film 'Caravaan' (1971) is one of the best among such songs. In fact, it was the catalyst in making Asha the queen of cabaret numbers. Her style of singing took the track to another pedestal.

'Dum maro dum' - A cult song, something very different from the usual songs created at that time. The versatile singer changes her usual voice for this gypsy track in 'Hare Krishna Hare Rama' (1971). Free flowing yet powerful, it showed a completely diverse side of Asha.

'Chura liya hai tumne' - A romantic melody from the film 'Yaadon Ki Baraat' (1973), the song has been a hit for decades. It still appeals to music lovers of all ages, making it an evergreen number. Asha's honey-tucked voice has done wonders for this composition, making it a hot favourite even after 36 years of its release.

'Yeh mera dil' - Pacy, hip with a strong musical backing, the song from 'Don' (1978) is still regarded as one of the best songs of the film. It seems that no one could have done a better job than Asha. The song is energetic and full on punch.

'Dil cheez kya hai' - Apart from cbaret numbers and romantic songs, Asha also proved her mettle in singing ghazals. A classic, 'Dil cheez kya hai' from 'Umrao Jaan' (1981) is a ghazal that pulls at one's heart strings. The song marked a bit of a departure from Asha's fast-paced avatar. A classically influenced song, this one is one of the milestones in the singer's career.

'Mera kuch samaan' - A song that was ahead of its times, it pits Asha in a league apart from her contemporaries. Beautifully composed by R.D. Burman and penned by Gulzar, the lilting melody from the film 'Ijaazat' (1987) proved Asha's versatility in the true sense. Soft music and complete focus on the vocals, made it one of Asha's best songs.

'Yayi re yayi re' - A 62-year-old Asha Bhosle sung this song in 'Rangeela' (1995), which was picturised on Urmila Matondkar, who was only 21 years old that time. Her voice oozed freshness and punch even after so many years. Needless to say, the song was a big hit.