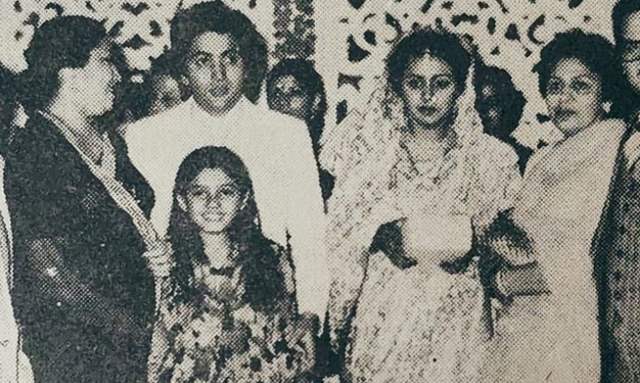 Actress Raveena Tandon on Tuesday finally found the picture late Rishi Kapoor was searching for. While the actress believes it is a little too late for the picture to be shared, nevertheless, she is happy that she was able to fetch the ‘priceless gem’ from Rishi Kapoor and Neetu Kapoor’s wedding.

The picture features little Raveena attending the late actor’s wedding which took place in 1980. In the picture, the actress can be seen posing with Rishi and Neetu. Raveena also mentioned that Rishi Kapoor was looking for this picture for his autobiography Khullam Khulla: Rishi Kapoor Uncensored.

“Found a gem . A tad too late though. Thank you @juuhithesoniibabbar for finding this pic. Chintu uncle kept asking me for this pic to put in his autobiography. And some how I had lost the original. Found it .so that’s me standing with chintu uncle, at his wedding .Wish I’d gotten it a bit earlier . Nonetheless it is treasure for me . #treasuredmemories  @neetu54”, Raveena Tandon wrote in a recent Instagram post.

Meanwhile, Raveena’s fans and followers were overwhelmed to see the throwback photo shared by the Mohra actress. A fan wrote, “I think mam...this is most memorable n lovely shoot..really thanks to juhi mam found unforgettable moment..ur look is so sweet (sic).” A fan also shared a trivia in the comments section, “Incredible- what a circle, Ravi ji directed rishi ji and Neetu ji in many Great films as Jhoota Kahi ka, Khel Khel Mein - And after years Raveena ji herself acted with Rishi ji in films as Sajaan Ki bahoon Mein (sic).”