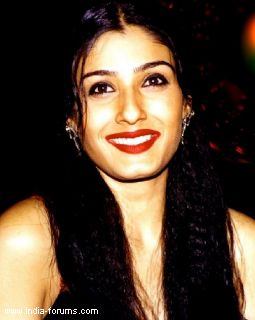 Cult comedy 'Andaz Apna Apna' changed the way comedy films were perceived in India. Raveena Tandon, who was a part of the comic caper, has confirmed she would be lending voice to one of the characters in this animated film called 'Andaz Naya Naya'.

'The animated version of the movie is being made, for which I am giving my voice,' said the 37-year-old actress at an event here.

The 'mast-mast' girl of Bollywood had taken a sabbatical after her marriage to industrialist Anil Thadani in 2004. But now, the mother-of-two is eyeing Bollywood again and has signed a couple of projects.

'I have just signed a few films. Shooting of one of them 'Gin Liya Aasmaan' has started and other films 'E-dil Sambhal Zara' and 'Shovna Seven Nights' will go on the floor in 3-4 months,' she said.

The National Award winning actress has acted in films like 'Mohra', 'Khiladiyon Ka Khiladi', 'Ziddi (1997)', and 'Shool'. She made a comeback in Bollywood with 'Bbuddah...Hoga Terra Baap' and was also seen in a Bengali film 'Laboratory' in 2010.