Mumbai, Dec 9 If marketing bosses for Yash Raj Films' 'Ladies vs Ricky Bahl' had their way, actor Ranveer Singh, who plays multiple characters in the the movie, would have gone out in different get-ups during the multi-city promotion tour. But the plans were dropped due to the stress he went through while essaying the characters in the film. 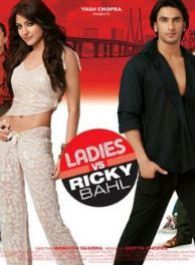 The film, which also features Anushka Sharma, portrays Ranveer as a conman.

According to a source, Ranveer was so much into his role that his friends and family often feel he is into an identity crisis.

'Ranveer threw himself into playing the title character Ricky Bahl and his various avatars to the point that he would converse in the given accent with colleagues, family and friends in the way alloted to his character at any specific time during the shooting of his film.

'If after 'Band Baaja Baraat', he couldn't snap out of his Delhi character's accent and body language, after 'Ladies Vs Ricky Bahl', Ranveer had his colleagues, friends and family worried with his quixotic changes in accent and character. We would often ask, 'Ranveer, tu hai kahan? (Ranveer, where are you lost?).' It got really scary,' said the source.

So, it was thought best to drop the idea of getting Ranveer to don the multitude characters during the promotion of the film, which released Friday.

'Yes, I was planning to go out in various get-ups to different cities. But we've dropped those plans. Very frankly, this role has been nerve-wracking .And I need a break before I start another film,' said Ranveer.

The young actor feels the need to spend some time alone during nights to bring back his creative energy and talent.

'Yes it's just me in my boxer shorts. That time with myself is mandatory now. I do need to break out of the spell. But I am grateful to Yash Raj Films for giving me two such contrasting roles one after the other.

'In 'Band Baaja Baraat', I was a rough and tough, uncouth Delhi guy. In '...Ricky Bahl', I am a suave ladies' man, who assumes a new identity for courting every woman. After my first film everyone expected me to be like my character in real life, so much so that they were shocked when they discovered me to be a regular Mumbai guy. Now after the second film I don't know which character I am expected to be. There are so many,' he added.