Mumbai, Jan 5 (IANS) This is a friendship that is 'special.' Rani Mukerji and Saif Ali Khan have bonded since they were paired opposite each other in 'Hum Tum' and 'Ta Ra Rum Pum'.

Rani was a patient listener when Saif poured out his heart to him recently. Rani and Saif had plenty of time to bond better in the weeks that they spent togeth 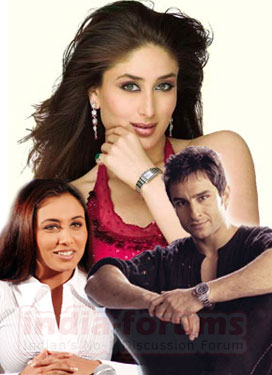 'Since Rani did have more than one costume change in the film, there was plenty of time to talk to her co-star. Saif and she were huddled together. Their topic of conversation was Kareena,' said a source close to both the actors.

'Saif was missing his lady love all the time as he was away from Mumbai. He could not help talking about Kareena all the time. Rani was attentive and sympathetic. She not only gave Saif a sympathetic shoulder, she even convinced Saif of what a wonderful girl Kareena is. Not that he needed convincing,' the source added.

Saif admits he doesn't hesitate to share his feelings with Rani.

'Rani is one co-star I can open up my heart to. She's a pal. And she listens,' Saif told IANS.

Rani's new fondness for Kareena is a surprise, considering their long-standing hostility.

The two leading ladies started off as pals during the shooting of Kunal Kohli's 'Mujhse Dosti Karoge'. But like all showbiz friendships, the Rani-Kareena friendship soured. There was a gasp of surprise when in a recent interview Kareena singled out Rani as a good actress.

With so many filmi friendships turning bitter, here is one renewed bonding between the two Bollywood beauties that is worth celebrating.