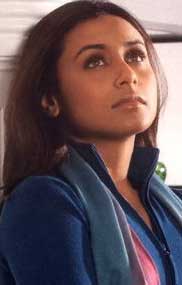 
Rani Mukherjee is going through a droop, and it may be her horoscope to hold responsible for it. Rumour has it that, they haven't been united in her goodwill for two years now. Aditya Chopra has decided to schedule the release of her film 'Dil Bole Hadippa' subsequent to September 9. So, her poor period has a opportunity to end.


Rani has had various flops in the past like 'Laaga Chunari Mein Daag', 'Ta Ra Rum Pum' and, 'Thoda Pyaar Thoda Magic'


Rani's last hope is 'Dil Bole Hadippa'. She has been restricted to Aditya Chopra's production house.  She is not allowed to work with any other banners. Consequently, 'Dil Bole Hadippa' is essential for her profession. A close friend to the bollywood actress said, "She is going through an unfortunate period in her rashi for two years. It ends on September 9. Adi wanted to release the film by the end of August or the first week of September. Now, the film has been postponed to the second week of September."


Aditya Chopra has in fact been told that it would be superior if he takes Rani's stars into thought. Yash Raj Films, which had taken a whipping at the box-office with their previous films, has finally made a comeback with 'New York'. Why roll and the dice and have the probability of ending up with snake eyes. Therefore, he is cleverly willing to wait. After all, the wait just might be worth it.