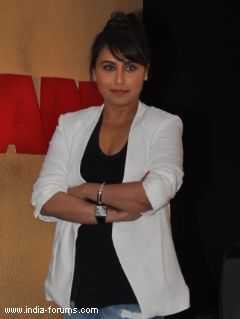 The trailer of the Rani Mukherjee starrer, Mardaani has received massive response from all quarters from the day it was launched.

Praise has been flowing in for the trailer and the impact has been very strong.

It also managed to start a lot of conversations on twitter as well as on other social networking sites.

It has got thumbs up from not only the audiences but also from people of the industry which includes comments from some unusual people.

Aamir Khan after watching the trailer of Mardaani, put up the link of it on his Facebook page as a must watch for his fans.  The actor also texted Rani immediately, expressing how much he had loved the trailer.

The two go back a long way (worked together in Ghulam) and Rani values any feedback or suggestion coming from Aamir.

Another person who called Rani after watching the trailer was Mukesh Ambani.  He had very good things to say to Rani about the content, her performance, the action she has done among other things.

Anjum Chopra, a woman cricketer, was very happy that Rani had taken up this subject and how glimpses of Rani's performance did absolute justice to the role she is essaying.

Others from the industry who could not stop talking about this action packed trailer of Mardaani and Rani's portrayal of a crime branch officer with a strong message were renowned people from the industry like Shekhar Kapoor, Raj Kumar Gupta and Ali Abbas Zafar.