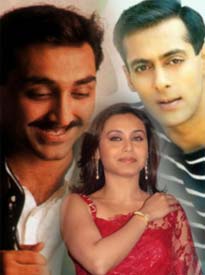 
Sources close to the production house have revealed that the actor is being considard for a lead role in a movie to be directed by 'Tashan' director Vijay Krishna Acharya. If all goes well, this will be Sallu's first film with Yash Raj camp. This should be Sallu's first movie with the big banner after ruling over Bollywood for 2 decades.


Earlier Salman Khan was approched by Aditya Chopra for 'Chak De India!', but Salman had quoted a very high price and kept the priducer waiting for 21 days. Following which on the 22nd day Aditya Chopra signed Shahrukh Khan for the movie, without talking to Salman.


But times have changed and Salman and Aditya shook hands and buried the hatchet courtesy Rani Mukherjee who is close to both the personalities.


Apparently this story discussion started a while ago on the 'Dus ka Dum' episode with Rani where she tried to convince Salman to let go of their differences.


Salman Khan is the only Khan who has not worked with the production house till date.


However a Yash Raj spokesperson denied that Salman had signed a film.
Featured Video