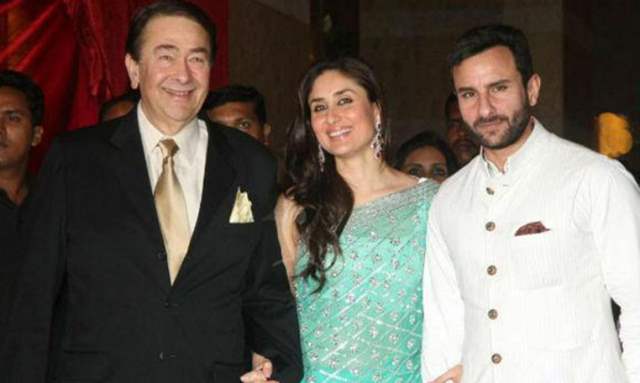 Saif Ali Khan and wife Kareena Kapoor Khan’s pregnancy rumors had made it to the internet and fans are overwhelmed with this good news after such a long time. This also means Taimur Ali Khan will soon get to play the big brother. While the report is yet to be confirmed by Saif and Kareena her father Randhir Kapoor has reacted to the same.

A Times of India report quoted him as he cheerfully spoke to us about the buzz. Randhir neither denied nor acknowledged the rumors and said that the couple hadn't told him about it yet, adding a claim that he was hearing this for the first time. He also added, "I hope it's true and if so, I would be very happy. Doh bachche toh hone chahiye to give each other company."

Saif Ali Khan and Kareena Kapoor are one the most adorable husband-wife duo Bollywood has ever seen. The two tied the knot in 2012 and were blessed with a cute little baby boy, Taimur, who is the apple of everyone’s eye today.

Meanwhile on the other hand, Kareena was last seen with Irrfan Khan and Radhika Madan in Angrezi Medium. She will be seen next in Karan Johar's 'Takht' which also stars Ranveer Singh, Alia Bhatt, Bhumi Pednekar, Vicky Kaushal, Janhvi Kapoor and Anil Kapoor in pivotal roles.