Mumbai, Jan 16 (IANS) Of late Randeep Hooda has been driving from his home in the suburbs much too frequently.

Asked if he was seeing someone in town, he quipped: 'Y 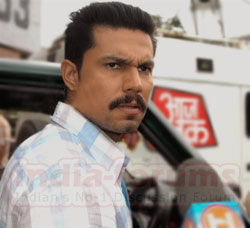 Featured Video
es, I'm seeing a chef at a posh hotel in town. This is for the role of a chef that I'm playing in my next film.'

Randeep has been spending a lot of time in the kitchen of a five-star hotel honing up his culinary skills, and can actually cook up quite a meal.

'By now I've become a master of spices. I'm not only a specialist at food but also the body language and the general demeanour of a chef,' the actor told IANS.

Randeep, who is doing Ketan Mehta's 'Rang Rasiya', isn't at liberty to discuss the film or the role. But from what one hears the actor plays a chef who has a relationship with a number of women of varying shapes and sizes.

'You make me sound like a very active chef. Let's put it this way. I play a guy who likes to cook up a whole lot of adventure,' he laughed.

One fortunate fall-out of the encounters with the chef is that Randeep has become the best host in town. 'I can cook a fabulous meal and play the saxophone for dessert.'