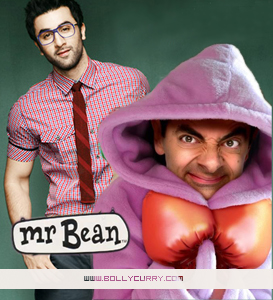 The hearthrob of the younger generation Ranbir Kapoor is all set to destroy his chocolate boy looks for his next film, Anurag Basu's much awaited Barfee.

Yes, you heard it right girls! Ranbir is ready to gain weight for this film, previoiusly named Silence, to better fit into his character.

The rumor mills are buzzing that the role Ranbir is to portray has been specially scripted after the famous Charlie Chaplin himself. Not only that, but there is yet another twist that we feel the need to share with you. Apparently, the character also calls for the Kapoor boy to imitate known characteristics and moves of Mr. Bean! What's even more surprising is that this addition was Ranbir's brainchild!

We, at BollyCurry, wish Ranbir luck for his newest avatar and hope the mish-mash of characteristics works to his favor!
14 Likes