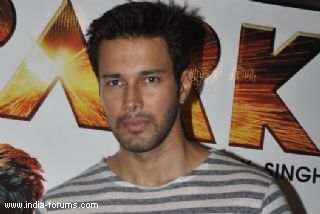 Model-turned actor Rajniesh Duggal, who won the stunt-based reality show "Khatron Ke Khiladi Season Five", is getting offers for action-oriented films, but none meets his expectations.

Earlier seen in horror drama "1920" and thriller "Samrat & Co.", the actor's next is a full-fledged action film titled "Spark".

"Action is something that I have always loved. A lot of action-oriented stuff is coming my way, but I am still looking for the action that I want to do," Rajniesh told reporters here Monday at the first look launch of "Spark".

"I hope it happens soon," he added.

Directed by V.K. Singh, "Spark" will see Rajniesh indulging into some daredevilry.

Talking about the stunts, he said: "There is raw action in the film and action director Abbas Ali Mogul has kept the raw action in it."

The 32-year-old, trained in Taekwando, Muay Thai and Judo, said that he didn't take "any special training" for the film and "did everything on the spot".