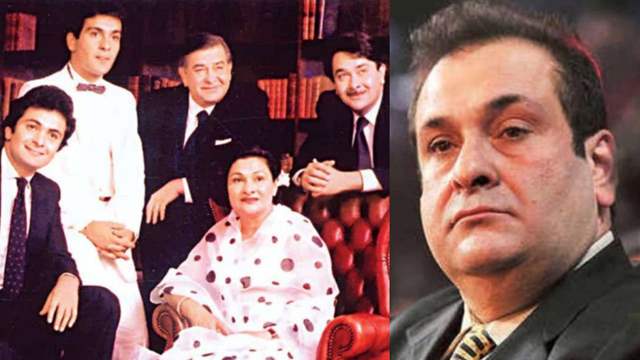 Rajiv Kapoor left for heavenly abode too soon. The actor-producer-director was 58 when he passed away in a sudden demise following a heart attack at around 1.30 pm on February, 09, 2021.

Reportedly, he suffered a massive heart attack and was rushed to Inlaks Hospital in Chembur by his brother Randhir Kapoor, as it was the only medical center closest to his residence. But, despite repeated attempts by the doctors to revive him, Rajiv breathed his last there and left for heavenly abode.  Randhir Kapoor, Rishi Kapoor and Rajiv Kapoor were the three sons of the legendary actor-filmmaker Raj Kapoor and grandsons of actor Prithviraj Kapoor. Raj Kapoor's other children include daughters Ritu Nanda and Rima Jain.

Unlike his elder brothers, Randhir and Rishi, Rajiv might have never had the success his other two siblings had, but so far none have ever pointed a finger at his acting abilities. With films like Ram Teri Ganga Maili and Aasmaan showcasing his true potential as an actor.

It was the lack of good opportunities and hard-hitting roles that never allowed Rajiv Kapoor to achieve the stardom he deserved. And he knew that well. Here's what the late actor once said about his own acting and career.

In an interview with Cinestaan, Rajiv Kapoor had said,

As far as my career is concerned, Ram Teri Ganga Maili is the best film I did. The other films didn't do well, but not all were bad. The sad part was that everybody wanted to project me like Shammi Kapoor, because I looked like him. To summarise in simple language – hit is fit. If your movies did well things would be on a different tangent. I did some nice films which had good music, but not many did well.

He said in the old interview that people on the streets would first call him Shammi Kapoor, then Rishi Kapoor (his brother), and then Rajiv Kapoor. The actor's biggest hit remains Ram Teri Ganga Maili, which released in 1985.

He told Lehren that everyone told him to model his performance on his uncle's persona in his first film, 1983's Ek Jaan Hain Hum. He said in Hindi,

It's a curious thing, but I look a lot like my uncle. Everyone who worked on the film; including the technicians, the director, the choreographer, the music director; they tried to portray my character like Shammi uncle. Because they'd all worked with him before, they made me behave like him. I was a young lad then, so I went with the flow. They used to brainwash me. As I grew older, and gained more experience, I realised that I should have crafted my own space.

Rajiv's close friends and industry people are devastated by his untimely demise. Pakistani actress Zeba Bakhtiar, who starred in Henna produced by Rajiv, has been inconsolable. Zeba said that she is absolutely devastated to hear the very tragic news. The talented actress further said that she just don't know what to say. She added that she is in touch with Daboo (Randhir), who has been through so much these past few years, losing his dear mother and siblings.

Dalip Tahil also said that it was hard to talk about Rajiv in past sense. Praising his sense of humour, Tahil said that one could be around Rajiv for hours as he was so full of life. Rajiv Kapoor's death is not just a loss to the Kapoor family but also to the entire nation.